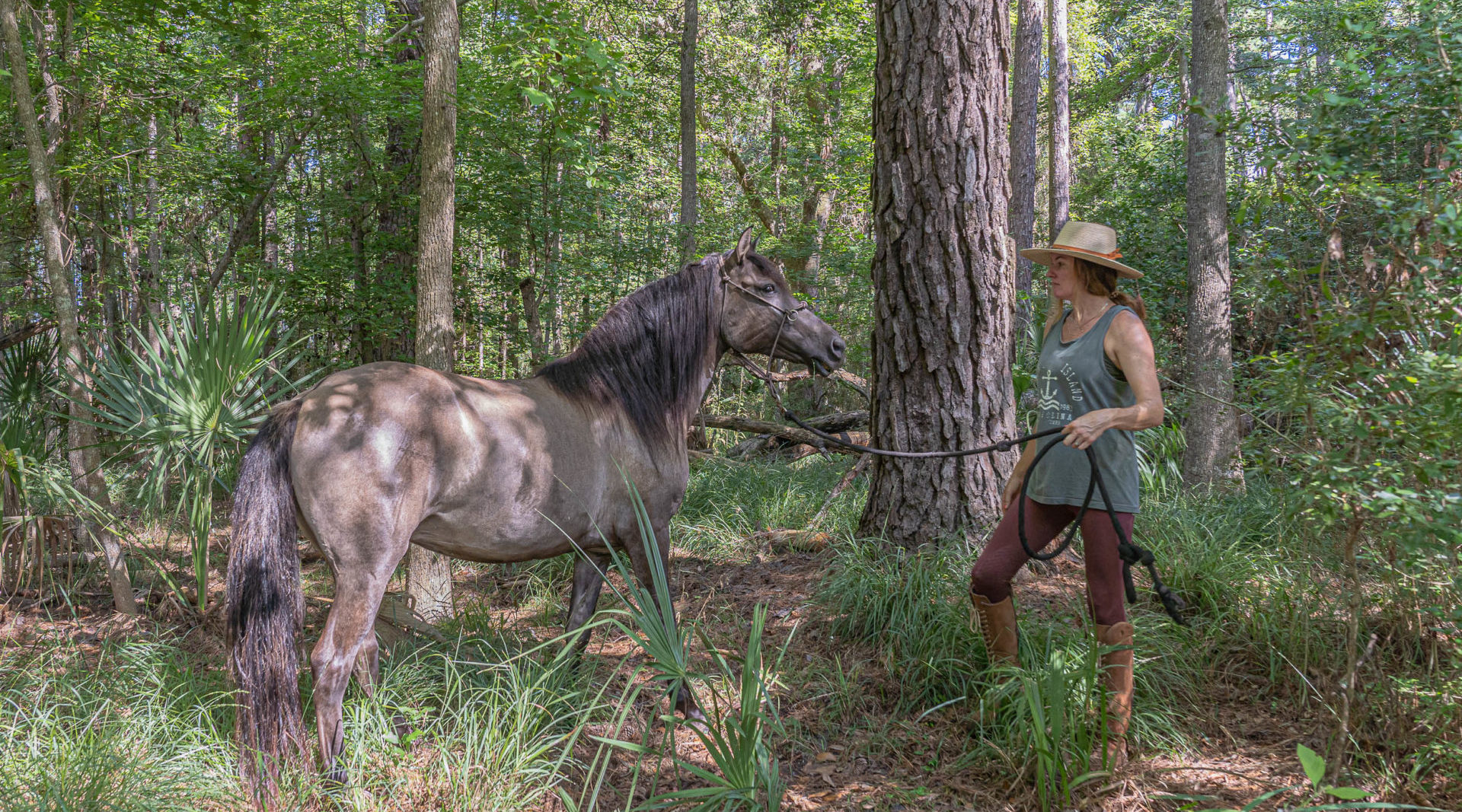 We walked out of the cottage onto the tiny porch and into the yard. Not long after sunset, the Daufuskie night thrust us into pitch-black darkness. On queue, cicadas, a harbinger of late summer in the south, began buzzing, louder and louder, until they reached a deafening crescendo. Then we looked up and saw thousands of stars twinkling above. Daufuskie’s Island’s isolation makes it one of the best places in South Carolina for stargazing. There are no traffic or city lights. Many residents there believe that a bridge would signal the end of peaceful, uncluttered solitude. Hence, the slogan: “no bridge=no problem.” It’s what makes Daufuskie Island so unique!

Eddie and I visited Daufuskie Island to take pictures of Marsh Tacky, South Carolina’s official state heritage horse. We found the rare Marsh Tacky horses and so much more!

The Marsh Tacky’s history and survival on the Island make Daufuskie Island so unique!

Erika Viet is the founder and director of the Daufuskie Marsh Tacky Society. A few months before traveling, I contacted Erica to arrange a photo session with the horses. The possibility of us getting together seemed doomed. I was out of reach between the first conversation and the scheduled date, and in the meantime, the Marsh Tacky Society had closed temporarily for renovations. Undaunted, I called Daufuskie Trail Rides. They sent a message to Erika, and with little time to spare, she let me take pictures the following morning as she groomed and fed the horses.

When we arrived at the Marsh Tacky Society, two horses moved casually to a shelter and peered at us from the open top of a dutch door. They turned their heads sideways as we walked closer to get a better look at us. They were picture perfect in the window as if accustomed to greeting people there.

While grooming the horses, Erica explained the history of the marsh tacky and the mission of the Daufuskie Marsh Tacky Society, a nonprofit 501c3.

“The mission of the Marsh Tacky Society is to promote and protect the endangered Marsh Tacky horse in the context of its historical roots on Daufuskie Island through breeding, training, and sales, plus education and special events.”

We learned that Marsh Tacky horses, such as Flaca and yearling Clover, are rare, and perhaps as few as 400 exist worldwide. They arrived on the shores of the Carolinas with Spanish explorers as early as the 16th century. Over the years, the horses adapted to the Sea Islands’ marshy and swampy terrain and humid subtropical climate. Early settlers, Native Americans, and Gullah Islanders all used the Marsh Tacky, and each family likely had at least two. The versatile horses did everything from pulling a plow and rounding up cattle to transporting people and goods. As modern development encroached on the islands, the Marsh Tacky began to disappear. Today, the Livestock Conservancy and the Equus Survival Trust list the Marsh Tacky as critically endangered.

Erica walked Flaca to the edge of the forest, explaining more. As I photographed the horses, the words regal, dignified, and intelligent came to my mind. The word tacky comes from the English word “common” or “cheap.” It sounds belittling but means that all people used them for all purposes in 16th-18th Century South Carolina. Frances Marion, “Swamp Fox” of the American Revolution, comes to mind. The Marsh Tacky carried the Patriots to victory through the marshes and swamps of South Carolina.

I noticed Flaca eyeing me cautiously and then looking back to Erica for confirmation that everything was ok. Then she began enjoying a treat of fresh greens from the tree branches.

Hundreds of years in the Lowcountry marshland shaped a more petite but sure-footed and durable horse with a gait called the Marsh Tacky Trot.

We met Barbara, Mary, Angela, and Linda on the road and toured the Island together. Dirt roads demand a slower pace, and our quiet electric golf carts allowed us the pleasure of forming immediate friendships. With one golf cart behind the other, we began our island tour.

Adding to our experience of the Gullah culture, our tour companion Barbara gave us a sample of the Gullah language that she learned as an interpreter in the medical field.

A lot of history is packed into an island five miles long and 2.5 miles wide. With so much Gullah heritage and Civil War history, the entire Island is a historic district on the National Register for Historic Places. A Palmetto Trust for Historic Preservations grant restored many Gullah homes and other structures. The “Rob Kennedy Trail” provides a comprehensive and easy-to-use guide to 20 must-see places.

Mount Carmel Baptist Church (Billy Burn Museum) captures the history, from pre-Colonial days through the mid-20th century and even earlier. Artifacts show that people may have inhabited Daufuskie Island at least 9,000 years ago! However, the endearing Gullah people leave the most lasting legacy. Descendants of Africans enslaved on rice, indigo, and cotton plantations, the Gullahs maintain their unique cultural identity to this day. After the American Civil War, they farmed, logged, and harvested oysters, making islands and their own.

Approximately one-quarter of the 400 full-time residents of the isle are Gullah people. Many left after the oyster business went bust in the 1950s due to pollution of the waters. The Gullah dialect survives as the only distinct African Creole language in the U.S.

American author Pat Conroy taught at the Mary Fields School and wrote about it in his 1972 book The Water is Wide. An indigo textile store Daufuskie Blues occupies the school now. At one time, planters grew as much indigo as rice in South Carolina. Following tradition, Rhonda showed us how early colonists dyed indigo for textiles.

I conjured images of a young Pat Conroy with mutton chops with his students huddled closely around as he intrigued them with tales of the world beyond the Islands.

As we headed into the First Union African Baptist Church, what a surprise! Sallie Ann Robinson came down the steps singing, clapping, and leading a tour group. Sallie Ann was Conroy’s Daufuskie Island student, Ethel, in the book. She is a sixth-generation island native, now an accomplished chef, cookbook author, and cultural conservationist. She is also an island tour master at Tour Daufuskie. We saw her again at Melrose Landing as we were leaving. She was standing beside her tour bus, waiting to enchant another group of visitors. Tour Guide Sally Ann Robinson is what makes Daufuskie Island so unique; see the Daufuskie Island Virtual Tour with Sally Ann Robinson.

The Daufuskie Praise House is a museum beside the First Union African Baptist Church. It provides more spiritual history of the Gullah people.

The beach makes Daufuskie Island so unique; it’s the secluded feeling! Only one other person was on the beach at sunrise, far away in the distance. The beach got its macabre name from the skirmishes between the Yemassee Indians and settlers. During the Yemassee War (1715-1717), “blood turned the water red.”

Where to stay and what to eat

Finding a place to stay on Daufuskie Island is easy. Choices range from spacious oceanfront homes and luxury villas to rustic cottages. Determine your objectives and pick your location. We wanted an authentic island feel and chose a rustic cottage. Eddie booked the 1926 Gullah Cottage. The two-bedroom cottage provides an equipped kitchen, living room with a tv, bathroom with a shower and clawfoot tub, and internet service. The perfect little porch was a great place to relax and not watch tv but reflect on the Gullah family that once lived there.

More importantly, no “haints” would dare enter, not with the color “heaven blue” painted outside the cottage.

Our favorite place to eat was the Freeport Marina pub & bar. There are a few more places, but not many. If there were, it wouldn’t be Daufuskie Island! There are no grocery stores, although the Freeport General Store offers trinkets and a few necessities. Bring snacks and keep in mind the limitation of what you can take aboard the ferry. We packed everything, snacks and clothes in our backpacks for two nights. Somehow I managed to pack all of my personal belongings in my photography backpack with photography gear, including a tripod and long lens.

Take time to peruse Daufuskie Island’s shops scattered around the Island. We took a little time to ride around and found the Silver Dew Winery – Museum, South Carolina’s oldest winery. The tiny building dates back to 1883. Constructed as a “wick house,” it stored wicks and the lamp for the Bloody Point Lighthouse. Next time we’re there, we’ll reserve the wine tasting and vineyard tour. And yes, of course! They have muscadine cider too.

Search Daufuskie Island for places to stay on your favorite app. Or, for more detailed information to plan your entire trip, check out this all-inclusive guide, A Guide to Staying on Daufuskie Island.

Getting there is what makes Dafusky Island so unique.

Ferry or water taxi? Either way connects you to a golf cart rental and golf cart waiting at the landing.

We took the ferry from Buckingham Landing in Bluffton, S.C., to Melrose Landing on Daufuskie Island. Stunning views and the salty air got us in an island frame of mind. It makes Daufuskie Island so unique! “no bridge=no problem!”

Save Time and Get the Best Photos

Nights of a Thousand Candles at Myrtle Beach, SC

To sum it up, Eddie and I will return to Daufuskie Island very soon!

We’ll return to ride the Marsh Tacky horses on the beach but not during turtles season; no horses are allowed then. The turtles need a chance to live naturally, too. Thanks to the generosity of Erica Viet for allowing us to see the Marsh Tacky horses up close and get the pictures. We wish the best for the Marsh Tacky Society that it opens again soon for more riding adventure and education about the endangered breed of horses. Erica is putting everything into the effort to save the horses, and we hope that generous donors help.

Do you ever get that a higher power has predetermined your life’s path and you’ll meet along the way? That’s how we all felt when our paths crossed Barbara, Mary, Angela, and Linda on Daufuskie Island. Our meeting enhanced our experience there, and we hope to see them again one day. 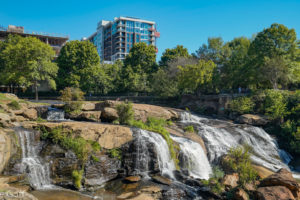 Images of Greenville, S.C. and a Surprise at Caesar’s Head State Park

We started with an appetizer. Fried Goat Cheese with Pistachio[...] 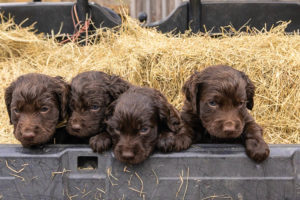 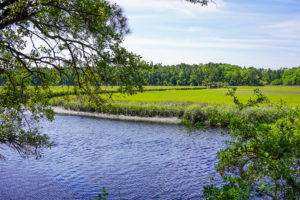