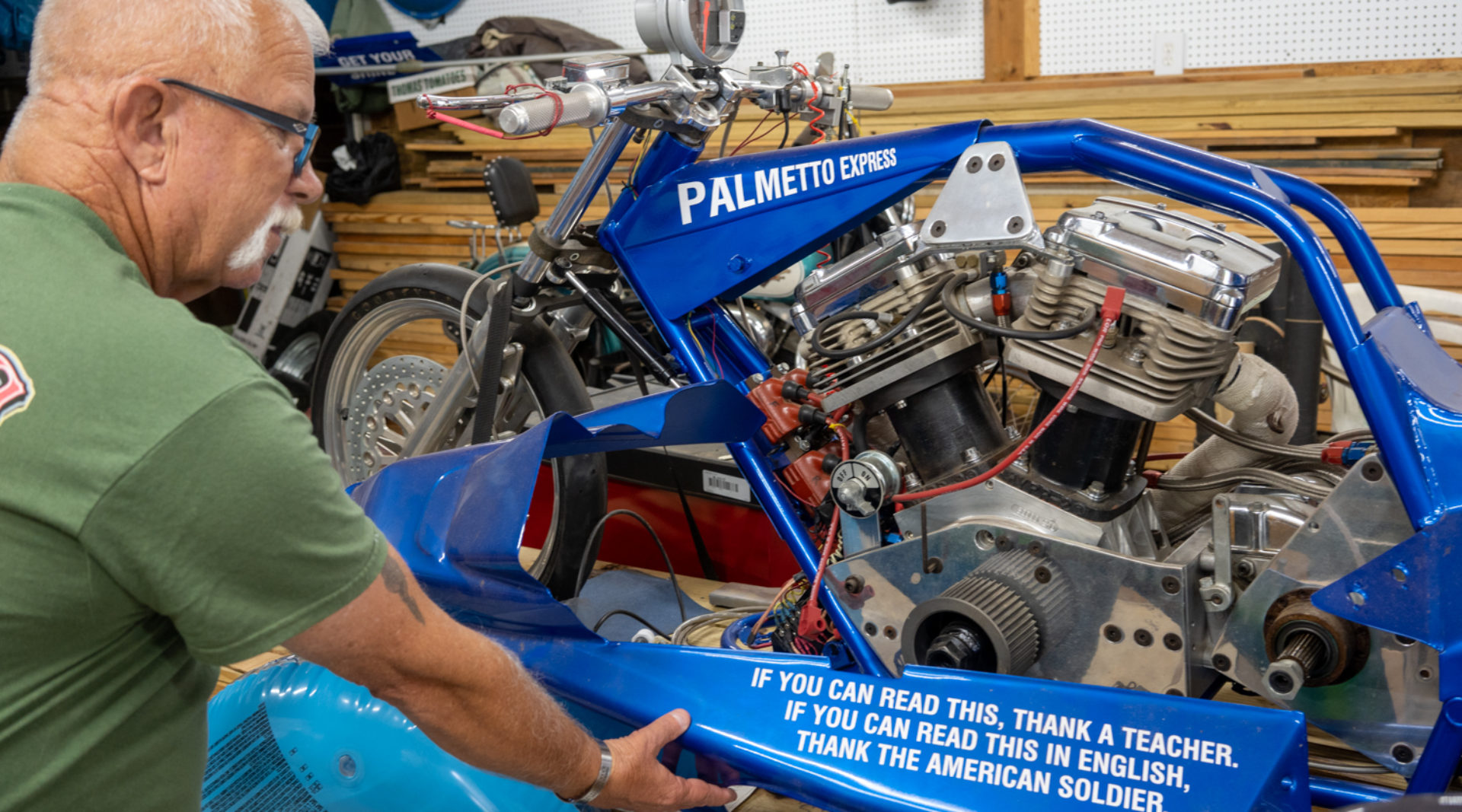 Excitement builds among drag racing enthusiasts as the smell of nitro-methane and burning rubber permeates the air. Nitro Harley Drag Racing is loud…and dangerous. A mere few inches underneath the driver is enough horsepower to reach speeds of 164 mph in 4.47 seconds on a 1/8th mile track. To fans, it’s a thrilling combination of danger and skill.

My husband Eddie and I recently caught up with our friend C.J., who was among 370 thousand rally-goers at the 80th Annual 2020 Sturgis Motorcycle Rally.

C.J.’s favorite event is AHDRA Nitro Drag. His lifelong fascination with fast cars, hot-rods, motorcycles, and drag racing started early. He grew up in the ’60s and ’70s in the small town of Edgefield, S.C. Back then, kids were tooling around with automobiles and motorcycles in their backyards and hanging out at local racetracks. According to Drag Strip List, South Carolina was home to over thirty raceways and drag strips during the 50/60/70’s. Today there are twelve, including the Darlington Raceway, home to the NASCAR Cup Series, Southern 500.

Drag racing in the United States heated up in the 1930s, in the salt flats of California. By that time automobiles were more affordable and more powerful. Death-defying drivers ran stripped down/souped-up automobiles for power and speed. The Southern California Timing Association (SCTA) operates salt flat racing at El Mirage Lake in California and Bonneville Salt Flats in Utah. Today, the SCTA and other racing organizations are concerned about the future of land-speed racing as a changing landscape disrupts ideal conditions for racing and increases environmental concerns. See more at CBS News report, May 20, 2020.

Historians credit J.C. “Pappy” Hoel, founder of the Jackpine Gypsies Motorcycle Club, with bringing the races to Sturgis, S.D. The first Black Hills Motor Classic was held there in 1938. The rest is a long, long history of growth and business savvy adaptation.

The Sturgis Motorcycle Rally is the ultimate bucket list event and possibly the largest motorcycle event in the world. The Rapid City Journal reports riders from as far away as Mexico and Canada, and some participants who ship their bikes from other countries. So popular, the event is recognized around the world with one word…” Sturgis”.

“My wife Lela and I rode my Harley to Sturgis for the first time in 2004. Back then we did things more or less on the spur of the moment. I’ll say no more, except to say that it’s an experience that neither of us will ever forget!” ~ C.J.

C.J. and Lela participated in many motorcycle events throughout the years. In this picture, they are in Greenwood, S.C., in the 2005 Christmas ride, Marine Toys for Tots.

“Camaraderie among rally-goers is special! It’s another reason I go.” ~ C.J.

C.J. remembers 2012 and 2015 as special because of the fellowship he enjoyed with friends on the ride and at the Buffalo Creek Campground. Convenient buses shuttled fans to their favorite events and there was nothing left to do but enjoy.

This time, alone in the COVID-19 environment, C.J. said the friendliness of others came through. He attended his favorite races and avoided crowds. Following protocols on the Sturgis 2020 website, he wore a mask and kept a distance from others, riding down Harley-Davidson Way only to take a few pictures. He enjoyed street food at the races, especially the sausage dogs. Vendors from across the U.S. offered everything from fast food to organic meals. Later when he ducked into a Saloon to cool off, he found himself enjoying a nice meal with people he met there.

“I met some of the nicest people, no trouble, everybody was kind and respectful.” ~ C.J.

He met many fellow rally fans along the way, especially as he got closer to Sturgis. At a gas station in Missouri, members of the Christian Motorcycle Association said a prayer and blessing for him and his bike before he departed. Just outside of Rapid City, he sheltered with other riders under a small awning during a hail storm.

When the rear tire of his motorcycle started going flat near Kingdom, MO., people quickly responded. He couldn’t say enough about Mr. Slate, owner of I-70 Towing & Recovery, and Craig Hammond, Mid American Harley Davidson. They were friendly, efficient, and professional.

A full day of patriotic events honors Service Members and Veterans. Sturgis Buffalo Chip provides a heartwarming example in the Touching Tribute to Veterans and Freedom.

C.J. was especially touched by Remembering Our Fallen. The traveling photographic war memorial honors our military Fallen from The War on Terror (9/11/2001 – Present).

“Seeing photos of our Service Members in uniform next to personal photos with their families is a moving experience, a powerful reminder of their sacrifice and loss for our freedom.” ~ C.J.

Bill and Evonne Williams are the Co-Founders of Remembering Our Fallen, Patriotic Productions. At the time of this publication, Bill explained that 5,100 of our country’s 7,000 Fallen are remembered on the memorial. Visitors to the site can see the tour schedule, how to host the memorial or add their Fallen Service Member.

For many participants, the adventure and challenge of riding their motorcycles across the U.S. from their hometowns is part of the ‘Sturgis’ experience. Reflecting on the 2012 event, when he pulled his motorcycle to Sturgis with his trailer, he found this was true. Riding the motorcycle is an adventure and this time he wanted to ride.

This year marked C.J.’s fourth event. He rode over 3,500 miles on his 2003 Harley-Davidson Heritage Softail Classic, (100th-anniversary edition). It was a nostalgic ride. On the open road, he thought about the sport of drag racing, past, present, and future, wondering if it would last and for how long.

“The best way to see America is on its highway and byways, out on the open road.” ~ C.J.

The most beautiful experiences on this trip were riding in the Missouri River Valley, IA.; along the Champlain River, S.D.; and seeing the 50-foot tall statue Dignity of Earth & Sky, in Chamberlain, S.D., honoring Native Americans of the Great Plains.

C.J. recalls the freedom of it, being on his own schedule, his own experience. But he also pointed out the practical side. Steady progress and safety were top priorities.

On the road, even with the heat, C.J. was covered in the best safety gear, helmet, leather, and gloves. He carried minimal gear on his motorcycle and plenty of water for hydration (Pedialyte added for electrolytes). With lessons learned from the past, he planned the trip online, this time sticking to Interstates and flat secondary roads. He calculated rest stops (minimum 20-minute breaks), gas stations, and stopovers. He spent a total of six nights there and back, and four nights in Sturgis. The total cost of the trip was $3,000.00 for gas, food, lodging, a new tire, and t-shirts.

The Journey Museum & Learning Center, in Rapid City, provides a compelling history, from the rally’s beginnings to the present, and at the end, offers additional information concerning the plight of museums in the COVID-19 environment.

Sergeant Major Charles E. “C.J.” Jackson served in the U.S. Army for 33 years. He says he couldn’t imagine doing anything else.

“It was the Soldiers that I enjoyed the most, best in the world.”

Today, C.J. enjoys his family at home in Edgefield. He and his wife Lela have two children and four grandchildren. He continues to tool around with motorcycles in his garage. In addition to the 2003 Harley-Davidson Heritage Softail Classic, he has a 2003 Harley-Davidson Police Road King, a 1975 Harley-Davidson Shovelhead, and the drag bike featured in this story, which he says, “keeps me up at night thinking about how to prepare it for the Drag Strip.”

C.J. contributed a detailed narrative, interview, receipts, and other documents for this story. He was a gracious host at his home in Edgefield, providing lunch from the Edgefield Billiard Parlor, see ROADFOOD for the latest review. It’s one of the best burgers that Eddie and I have had!