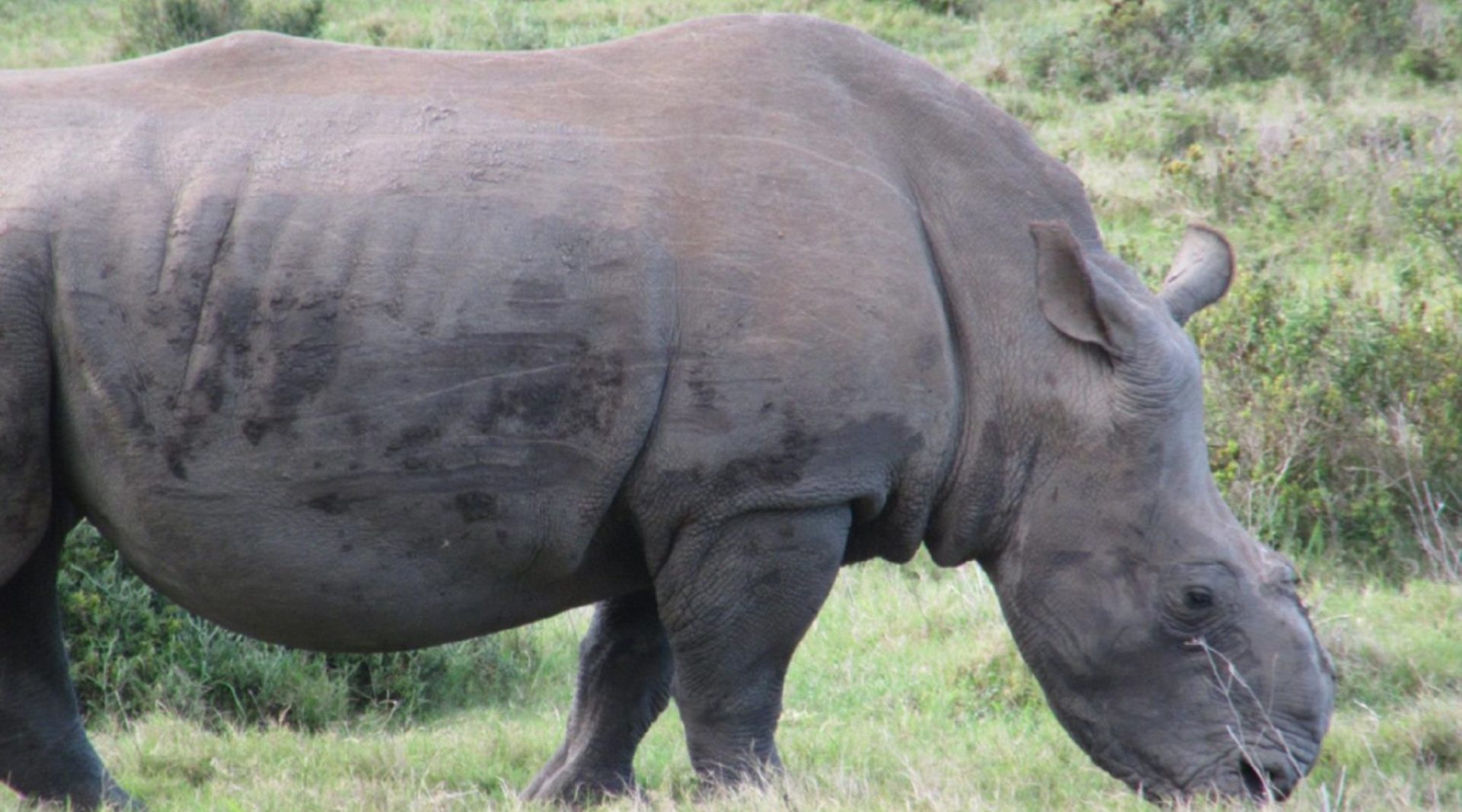 There was just enough light in the grey dusk to see a large shadow cross the path a few yards in front of our truck as we crossed open terrain headed back to our lodging at Kariega Game Reserve in South Africa. Jo, our seasoned guide, knew that it was Thandi. She stopped and turned off the engine of our open-topped truck and shined a small light above the animal to give us a glimpse. There was no sound. We were stunned and barely breathing. My skin was tingling and the hair on my arms stood up. There was Thandi, a female white rhinoceros in the

wild, in her own environment, going about her own mysterious business. Thandi was not distracted from her mission. She never changed her steady gait and merged much too quickly into the increasing black abyss of night. We strained our eyes to see more of her, but she was gone from our view in less than a minute.

Thandi is a survivor of poaching. In fact, she is the poster child of that brutal act and there are numerous videos of her story. She was poached for her horns in 2012 and I saw her in 2014. Celebrities such as Yao Ming and Sir Richard Branson are WildAid ambassadors for sharks, elephants and rhinos and some have documentaries with Thandi. The goal of the ambassador is to educate and discourage people from buying products made from rhino horns. It was my good fortune to see Thandi for myself while on a trip to South Africa with Leadership Women – International. Thandi is in her own wild environment and my group of four had two encounters close enough to thrill at her enormous power and remember her for a lifetime.

Seeing wildlife is a chance encounter on these excursions in South Africa. Wildlife is living in their own environments and their movement is not completely predictable. As we prepared for our drive the next morning, we unanimously said that we wanted to try to see Thandi again. At the last minute, we were joined by a fifth passenger, a wildlife caretaker who shared the details of Thandi’s story. We rode for a while and eventually parked the truck and waited. It was not long before Thandi walked right past our truck from behind and parallel to the left of us, about 20 yards away. A female white rhino can weight up to 5,000 pounds. Words cannot describe the experience of seeing a rhino that close and to see Thandi after hearing her story was very special. We also learned that Thandi was pregnant, amazing considering what she had endured.

To share some of the background, Thandi and two other rhinos were poached for their horns in 2012. Thandi and one other rhino, Themba were found alive, and doctors went into the bush to treat them every few days. Sadly, Themba later drowned, too weak to get out of a watering hole. Thandi was found to be pregnant. That she was alive and able to bear the calf after so much suffering is a miracle. The footage at the discovery site is heartbreaking and unbearable. But the videos of Thandi and her calf is heartwarming and full of hope. The calf, named Thembi (meaning Hope in isiXhosa), is also famous. Her story is appropriately named the rhino that should have never been born. Thandi had another calf, named Colin, born in Jan 2017 and she continues the business of raising her family while also raising hope for the future of white rhinos in South Africa.

Thandi’s story stands out as poignant notice of how wildlife in Africa struggles to survive. There is a literal war between the poachers and the protectors. Not only the rhinos but elephants, giraffes, hippos, and other wildlife are at risk due to poaching and loss of habitat. I feel humbled and blessed to have seen Thandi and other incredible wildlife during our visit.

How We Got There
This international travel-study trip was put together by Leadership Women, http://www.leadership-women.org, a nonprofit headquartered in Dallas, Texas. Leadership Women is the longest running organization specific to women and designed to “advance and improve the personal, economic, and professional status of women”. Cultural activities contained in this article are immersed in between informative lectures, site visits, and leader exchanges in the areas of business, government, education, economics, and healthcare. This article is the product of my experience and not the opinion of Leadership Women.
Poaching

Wildlife Watch at https://news.nationalgeographic.com/wildlife-watch, is a valuable resource for following poaching issues. It is an investigative reporting project between National Geographic Society and National Geographic Partners focusing on wildlife crime and exploitation.

Over 1,000 rhinos were poached there in 2017. They are considered in “imminent danger” of becoming extinct. Eighty percent of the world’s remaining rhinos are in South Africa.

The world’s last male northern white rhino, Sudan, died this year. Two females, Sudan’s daughter and granddaughter remain at the Ol Pejeta Conservancy in Kenya. Scientists are using extraordinary means to attempt to save the species there. See the video at https://video.nationalgeographic.com/video/news/180320-sudan-last-remaining-male-white-died-vin-spd.