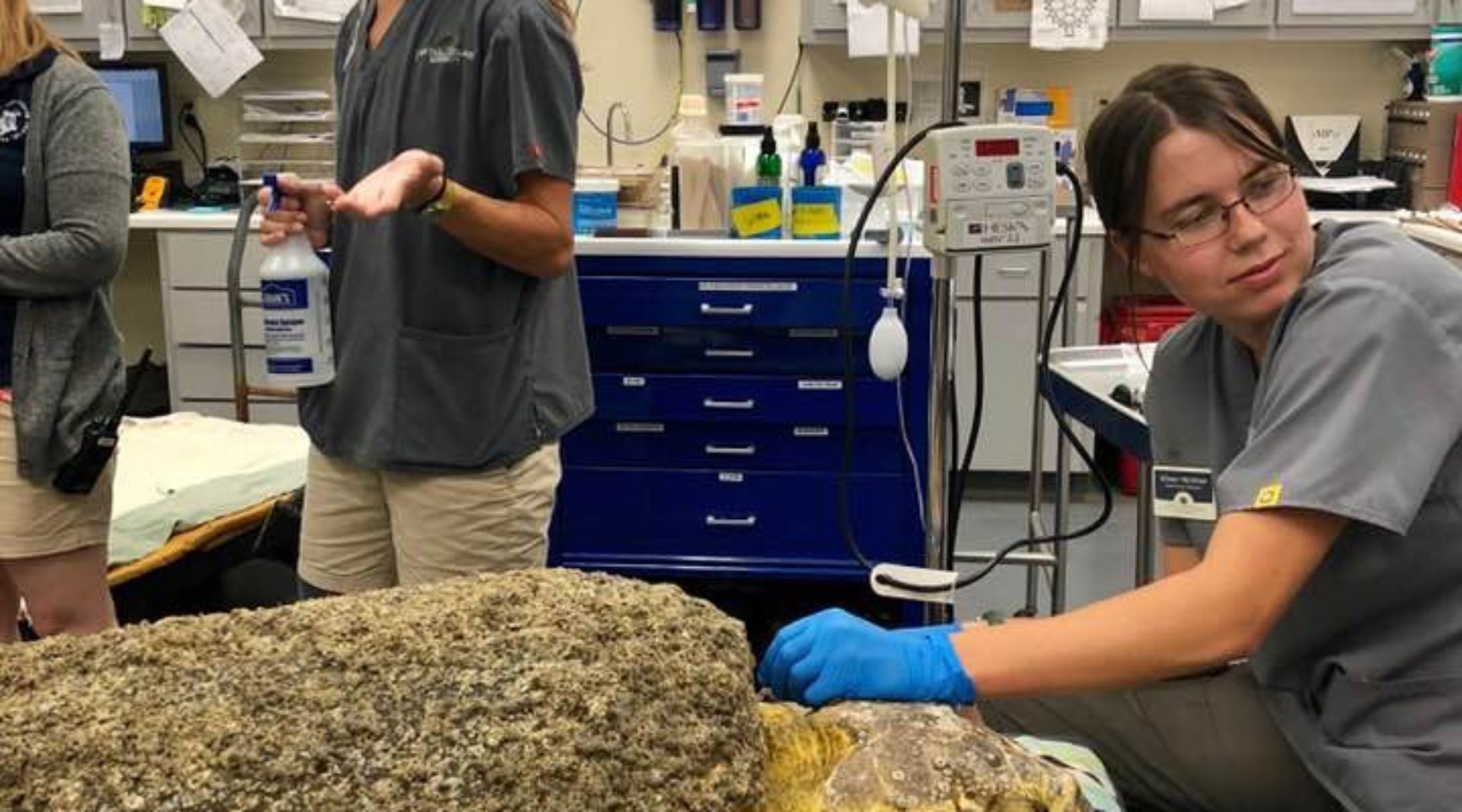 Behind the Scenes at a Sea Turtle Hospital

The patient was not moving, a sign that she was very sick. Typically the technicians would be cautious of the turtles’ powerfuf jaws and flippers. Her carapace, hard upper shell, was heavily encrusted with epibiota such as barnacles, leeches and other organisms that live on the surface of another living organism. Technicians at the sea turtle center suspected that she had been gradually slowing down in the water for a while, expending more and more energy as the epibiota grew to an excessive amount. They didn’t know yet what had caused her to get in this unfortunate condition. But they did know that if she had not washed ashore and been found by people who called for help, she would’ve surely died soon.

This was the scene in the examination room of the Georgia Sea Turtle Center on the morning of August 4th. Earlier that morning, the turtle center accepted a debilitated loggerhead sea turtle that people discovered on a beach in Florida. An adult loggerhead turtle weighs from 250 to 300 pounds or more, but this one, a female, weighed only 150 pounds. During our visit, she was on the examining table and had the undivided attention of two medical technicians. Similar to what happens when we visit the emergency room, the technicians were monitoring her vital signs, taking blood and tissue samples, and administering intravenous (IV) fluids. While we watched, a technician added antibiotics to the IV while another sat on a stool at the head of the turtle checking vital signs. In addition to behind the scenes observers, visitors of all ages were observing the events in the examination room through a large glass window. A large tub sitting outside the examination room was already filled with a few inches of water, the new patients bath. Our guide explained that the tub would not be filled to capacity until she gained her strength and in the meantime, she would be able to breathe fresh air without much effort.

The turtle’s recovery might appear grim to the observers that day but the medical team had high expectations for her eventual reintroduction to the sea after rehabilitation. This positive outlook is one of the factors in the doctor’s decision to accept a sea turtle as a patient. We learned yesterday, two days after admittance, that the turtle was in in her tub of shallow water and starting to eat. This is a very good sign. This was my first exposure to a sea turtle trauma and rehabilitation. I’ll continue to check periodically until one day, if all goes well, she is reintroduced to her natural habitat in the sea.

The Georgia Sea Turtle Center was created and is operated by the Jekyll Island Authority. Dr. Terry Norton is the founder, director, and veterinarian. It was clear that the staff at the center is dedication to the conservation and care of sea turtles.

My husband arranged the behind the scenes tour of the Georgia Sea Turtle Center as a gift for my birthday. It was a coincidence that this sea turtle was admitted earlier that same day. The ‘Behind the Scenes’ tour is $26.75, worth every penny! General admission tickets are $9.63. The summer eco-program includes evening turtle walks, summer gatorology, sunrise walks, egg-sperience dawn patrols and rides with the night patrol. The center also accepts donations, symbolic adoptions, volunteers, and other support.

The Georgia Sea Turtle Center is located on Jekyll Island Georgia. Through rehabilitation, research, and education, the center’s goal is to empower people to protect the environment. The tremendous amount of hazards that sea turtles and other sea life face as a result of pollution and over fishing is heartbreaking. In addition to sea turtle rehabilitation and research, education is key to the successful outlook for sea turtles and all marine life. The Georgia Sea Turtle Center is center stage with an interactive exhibit gallery, rehabilitation pavilion, and eco-programs.

The seven species of sea turtles include Green, Loggerhead, Kemp’s Ridley, Olive Ridley, Hawksbill, Flatback, and Leatherback. They are also called Marine Turtles. Worldwide, six of the seven sea turtle species are classified as threatened or endangered. There was once millions of sea turtles in the world and now there are less than a million. Sea turtle hospitals are crucial to their survival.

The biggest threat to sea turtles is human actions and lifestyles. “Currently, we kill an estimated 4,600 turtles every year due to fishing”, reported by Treehugger. Entanglement in fishing gear, pollution, habitat destruction, poaching, and illegal trade of eggs, meat, and shells. Many scientists believe that climate change also has a detrimental impact of sea turtles. The education center at the Georgia Sea Turtle Center explains that about one in every 4,000 sea turtle hatchlings will live long enough to reproduce. Without continued worldwide protection, the remaining seven species could become extinct.

Find out more about The Georgia Sea Turtle Center at https://www.gstc.jekyllisland.com.

Find out more about the status of sea turtles, go to Sea Turtle Conservency at https://conserveturtles.org.

Report sick, injured, endangered, or dead animals ensures that professional authorized responders can take appropriate actions. Keep your distance form the animal and call your local stranding network. Go to the National Oceanic and Atmospheric Administration at https://fisheries.noaa.gov to locate the by state. For example, the South Carolina Stranding Hotline is (800) 922-5431.