Checking Up on Downtown Charleston

The street was dark except for the glow of gas lamps to light the way. A lively melody spilled from a pub onto the street, the singer’s voice familiar. He was perched on a stool just inside the door, playing his guitar. As we entered, he smiled and nodded. We’d been there before and enjoyed the lively atmosphere, but this time was different. The pub was empty except for one couple at a table and a few people at the bar. Between wistful melodies, the singer halfheartedly joked about the emptiness, and then he sat at our table to talk for a while.

Downtown Charleston, S.C. is a two-hour drive from our home in West Columbia. Eddie and I visit there regularly just to admire the beauty and enjoy the vibrant atmosphere. Last week we drove there specifically to photograph the city and just see how things were going. We’d not been there since the beginning of the year before the stay-at-home orders were implemented as a result of COVID-19.

On the drive, we reminisced about a number of national conferences we’d hosted in Downtown Charleston while serving in the S.C. National Guard. It was a popular choice among desirable locations and we always took pride in showing it off. Today, we continue to introduce out-of-state guests to the romantic city. This year Charleston was voted the No. 1 city in the U.S. for the eighth year in a row by readers of Travel & Leisure magazine. The criteria for the coveted award is based on the sights, landmarks, culture, cuisine, friendliness, and shopping.

As we got closer to Charleston, I checked my hotel app for available rooms. To my surprise, The Elliott House Inn popped up. Typically, The Elliott House Inn, known as ‘Charleston’s most charming historic inn’ would be booked this time of year. This was our first indication of the effects of the pandemic. The Inn is nestled in between other elegant structures on historic Queen Street, within steps of Charleston’s Museum Mile, the French Quarter, and The Battery. We didn’t hesitate to book the room!

We entered the city on Meeting Street, Downtown Charleston’s most historic street. It wasn’t long before we began to notice outward signs of the pandemic. First, we noticed that the windows of one of our favorite restaurants were covered with brown paper. Then we noticed the empty streets around the historic Charleston City Market where usually there were throngs of people and traffic.

We turned onto Queen Street and checked in at The Elliott House Inn, a quaint structure built-in 1861. The desk clerk apologized for the lack of typical Southern hospitality. Due to the pandemic, the evening social and complimentary breakfast was temporarily canceled. He graciously advised that coffee service would be available in the cobblestone courtyard the next morning. We assured him that no apologies were necessary and that we were delighted to be there.

The other magnificent structures surrounding The Elliott House include 82 Queen (1688), Husk (1893), and Poogan’s Porch (1888). Beginning as private homes, they date from one hundred to over three hundred years old. Today, these restaurants serve equally magnificent Southern cuisine.

Husk restaurant was booked when we called for reservations but they advised us that walk-ins were welcome. The maitre d’ apologized as she seated us on the second-floor balcony, saying that inside seating was full. We said that no apologies were necessary; we wanted to eat outside! We dined under the shade of a live oak tree with a gentle breeze blowing, in view of the pale pink walls of The Mills House Hotel. Soon other tables on the balcony were full and we were happy to see more customers waiting outside.

Husk boasts about their ingredients,

“If it doesn’t come from the South, it’s not coming through the door.”

A nice surprise at Husk is that you never know what’s on the menu. It changes daily, sometimes as often as twice a day, depending on what produce is available. These were our menu selections:

We planned our walk at dusk, during the Blue Hour when deep blue hues and cold saturated colors of the sky are ideal for city photography. In Downtown Charleston this time of day, the scene is enchanting!

As we walked, we noticed more than ever the essence of what people love about Charleston and why it continues to be voted the No. 1 city.

The atmosphere in some areas is hauntingly beautiful, perfect for Charleston Ghost & Vampire Tours, and we saw an occasional small group huddled, not too closely, around a storyteller.

Carroll Brown was playing his regular gig at Tommy Condon’s Restaurant, and we ducked in to listen for a while. During Carroll’s break, he sat with us and talked about the effects of the pandemic on his routine as a musician. Before COVID-19, he was working gigs almost every day of the year at regular venues in South Carolina, Georgia, and Florida. This year, he wondered whether he’d have even half as much work.

We felt a poignant sense of loss about how the pandemic has affected so many.

With adept attention to maintaining a positive spirit, the great storyteller changed the subject to history, another of his passions. Soon we were taken back in time to 1780 to 1782, when Charles Town was occupied by the British and Frances Marion became a legend.

The next morning, we headed to The Battery to take pictures during the Golden Hour, when the sky turns from red to yellow, creating golden tones for landscape photography. Stunning views at The Battery look across the harbor toward Fort Sumter and Fort Moultrie National Historical Parks and back to Rainbow Row on E. Bay Street. The Battery was empty except for a lone runner on the promenade, with an extraordinary view for inspiration.

We turned back towards Meeting Street to have breakfast at Toast!, voted the best restaurant by the New York Times, Post & Courier. The menu offers something for everyone, elegant to simple but all Southern. Our selections included both.

At first, we were the only patrons and our waitress very graciously thanked us for coming in. Before the pandemic, the place would have been packed. Soon another couple was seated and as we departed, the servers were huddled at the hostess station. On the way out, I said a silent prayer that they would all be busy again soon.

The morning was filled with renewal, hope, and inspiration.

Following breakfast, we arrived at the aquarium just in time to see Tom Mullikin and the South Carolina 7 Expedition cross the finish line, after 30 days on the Palmetto Trail. State and local officials were on hand to congratulate the group for showcasing the beauty of South Carolina and for leading compelling discussions about the State’s resiliency. After the ceremony, we headed to another of our favorite restaurants for lunch, Fleet Landing, housed in a retired 1940s naval building. As we walked, we noticed traffic picking up and more people out and about. Children were playing at The Fountain at Waterfront Park. In between the Park and the restaurant, we passed the busy construction site of Charleston’s new waterfront hotel, The Cooper, projected to be completed in 2022.

A tour of Downtown Charleston is not complete until you’ve enjoyed Historic King Street Shopping. King Street is the second most historic street in Charleston. With 300 blocks of shopping, it’s worth the time to plan ahead for the best experience. Three distinct districts include Lower King Street Antiques District; Middle King Street Fashion District, and Upper King Street Design and Dining District. With little time to spare and tired feet, I headed directly to the Fashion District, with Eddie reluctantly following. In a little under a mile, we walked up to one side of Middle King Street and down the other. Although my favorite shoe store was gone, we, or at least I, had a great time shopping!

As we drove home, Eddie and I reflected on our brief but refreshing experience in Charleston. We were consoled by the beauty of the city and humbled by the people, musicians, waiters, desk clerks, shop attendants, and others, maintaining positive spirits in spite of the pandemic. We were uplifted by the sight of the iconic vendors at City Market: Gullah artisans selling sweetgrass baskets; the refreshing art of Johnathan Green; the hat shops, where we love to try the latest styles, and still did, with the added precaution of using a disposable liner. We’d heard inspiring visions of the future shared by Local and State leaders and saw evidence of growth and renewal.

We thought in awe about how we as people adapt to change and inspire it as well.

Carroll Brown performs throughout the southeast at festivals, pubs, and other venues and hosts annual tours to Ireland and Scotland. See Carroll’s bio and schedule at Carroll Brown Music. 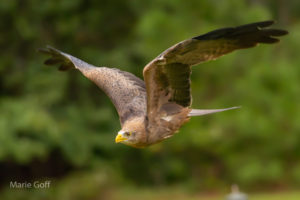 Photography day at the Avian Center flew by! No pun[...]