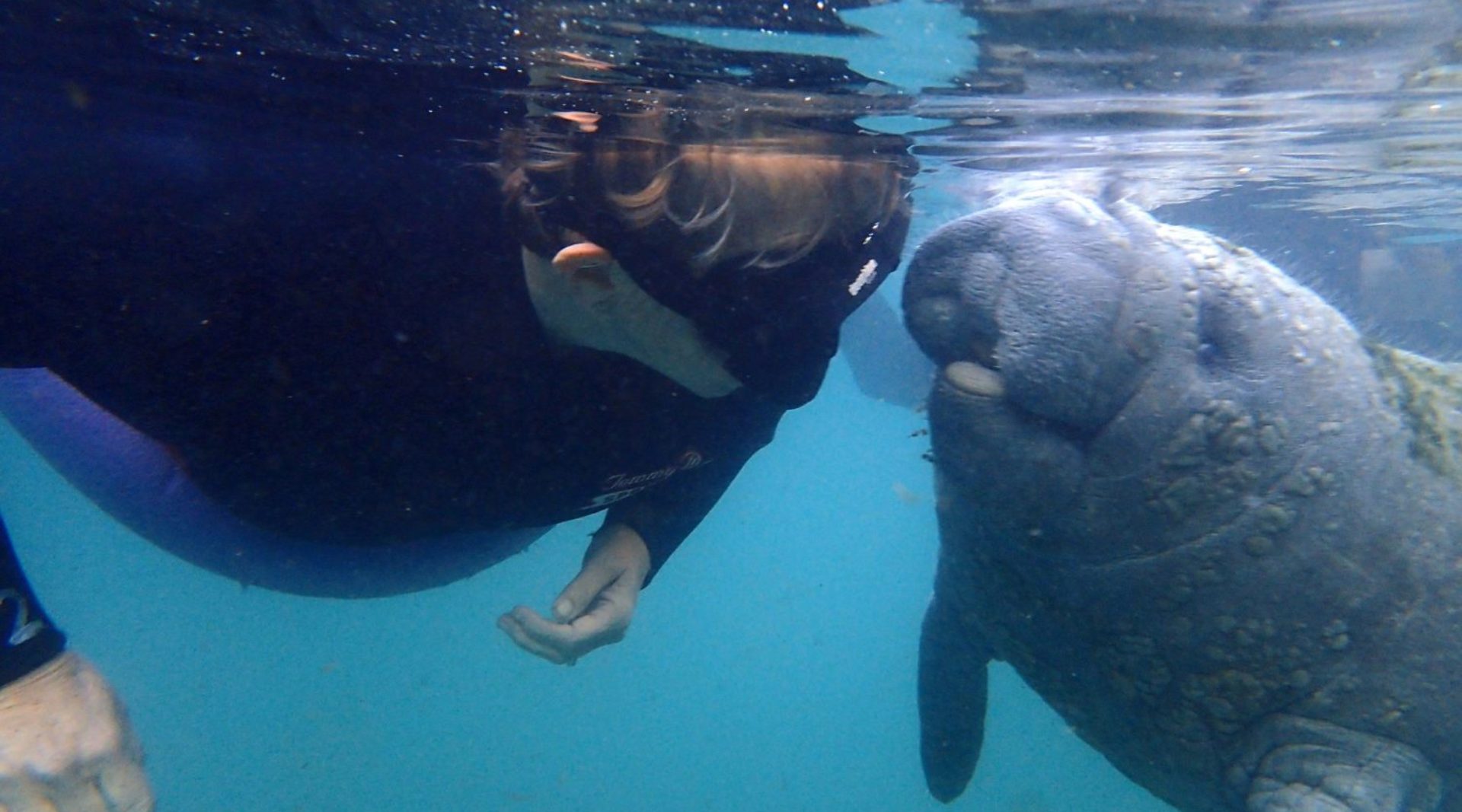 The manatee calf was watchful of her mother. As the mother ascended to the surface from the bottom of the spring fed bay to get air, her calf came alongside to nurse. I was about two feet away, viewing them through my snorkel mask. The chance to witness this amazing and unexpected occurrence did not last long. The mother poked the end of her snout out of the water just long enough for her tiny nostrils to blow a breath out and take one in. The bottom was only a few feet down and she was back there in no time, with her baby swimming close by.

During orientation, our guide had explained that we would be especially blessed to see a nursing manatee. We counted our blessings!

On the bottom, the adult manatee focused on eating. With her blunt, stubby snout buried in the tall grass, she pushed steadily forward. We could see her through the clear water and hear the crunching sound she made as she ate. Our boat Captain, John B. and Crystal, our guide and photographer, explained that even though manatees appear unconcerned that snorkelers are nearby, they know your whereabouts at all times. As we experienced, they are pros at gently pushing you out of the way as they are moving. We stayed still, floating and watching. The crew calls this “passive observation” and it’s the best way to observe manatees.

Crystal led us back to the boat to go and check another area of the bay. After a short ride to the other side of the bay, we were in store for another amazing and unexpected encounter with manatees. Crystal warned again, “keep your hands to yourselves…do not reach out to the manatees…do not try to pet them…do not make any unnatural sounds or movements”. The crew takes the protection of the manatees very seriously. She said, “If we find that one in a million wanting to play, I will let you know.”

It was our good fortune to find that one in a million, a calf that wanted to play! While his Mama ignored us and continued to crunch grass on the bottom, the calf darted all around us.

Crystal lured the calf to her for a closer encounter by sitting in the water as if sitting in a recliner. And yes, the calf swam up her legs and rested his snout on her neck, nuzzling as if giving kisses. Then an interesting thing happened. The calf bypassed all of us in pursuit of my husband! Eddie, a novice like the rest of us, couldn’t keep his head above water with the manatee on his back. With a mask full of water, Eddie gently made his way to the boat trying not to startle the calf. Whew! John B and Crystal were surprised by the calf’s behavior and Eddie is forever known as the manatee whisperer by our group.

With my husband back in the boat, the rest of us vied for the calf’s attention. I tried to mimic the guide’s position in the water as she lured the calf to us. I could feel the pressure of the calf’s flipper as he tried to hold on to my leg.

Imagine swimming alongside an 800-to-1,200-pound creature that inspired the lore of mermaids.

We headed back to the dock filled with wonder at our experience with these animals and an appreciation for the organizations’ that are tirelessly working to save them from extinction.

Crystal River, self-proclaimed “manatee capital of the world”, is a city centrally located on the Gulf of Mexico in Citrus County, Florida, approximately 90 miles northwest of Tampa. The river is seven miles long and drains into a basin of five square miles known as Kings Bay and joins the bay to the Gulf of Mexico. Thirty natural springs feed Crystal River, adding 300 million gallons of warm water every day. Manatees thrive in the warm temperature, a nice warm 72 degrees Fahrenheit year-round. There are 400 to 1000 manatees in the area during the peak season from November to April and it is the only area to legally swim with manatees in the U.S. The manatees draw thousands of people each year, especially during these months. We were there in early October, just before the beginning of the season. Thankfully, there are a few manatees that reside in the area throughout the year, and we were not disappointed. Our boat of six visitors were fortunate to swim with at least six manatees up close for about two hours.

In between visits with friends in Tampa, Florida, my husband and I had time to drive to Crystal River. River Ventures offers easy online booking, and I booked our visit the night before. You may need to book earlier during peak season. Upon our arrival, the folks at the Education Center gave us a brief orientation and handed out wet suits. They transported us to the dock in just a few minutes and we met our boat Captain, John B and our swim guide and photographer, Crystal. Both were knowledgeable, entertaining, and patient with novices. Once we returned to the Center, we purchased our pictures for a small fee.

The food source for the manatees and other aquatic life is eel grass. The grass we saw was twelve to twenty-four inches tall but can grow up to three feet tall. Our guide explained that efforts are underway to restore eel grass in Kings Bay, an area that had turned into a dead zone not too long ago. Save Crystal River is a nonprofit organization dedicated to ensuring a rich source of food for manatees and other marine life. It’s a long-term effort to continuously remove decay, restore eel grass, and keep it clean. Their ambitious goal is to restore 92.4 acres by 2023. Go to https://savecrystalriver.com to learn more.

If left alone, manatees may live up to 50 to 60 years and die of old age. Scientists believe that sharks, crocodiles, alligators, caimans, and jaguars attack manatees occasionally but they there is no documented evidence, and this is not a threat to their survival.

The biggest threat to manatees is loss of habitat, fishing nets, watercraft and toxic algae.

The Crystal River National Wildlife Refuge was established in 1983 to protect manatees and there are seven manatee sanctuaries in Kings Bay. During the peak season for manatees, usually 15 November through 31 March, all public uses of these areas are prohibited, including swimming, boating, and fishing. Manatees have become accustomed to the safety of sanctuary areas, but they continue to be victims of water-craft incidents outside of these areas. An average of 80 manatees each year are killed by encounters with watercraft. The day we visited Crystal River to swim with manatees, a Florida game warden alerted our boat captain that they were searching the area for an injured manatee.

The main areas where manatees live include Florida, Africa, and the Amazon, manatee-world.com. We are fortunate in the United States to have five great places in Florida to see manatees, where there are 6,500 believed to live, visitflorida.com.

Florida has designated November of each year as manatee month to raise awareness about the threatened population.

Go to defenders.org to see how you can help save manatees.