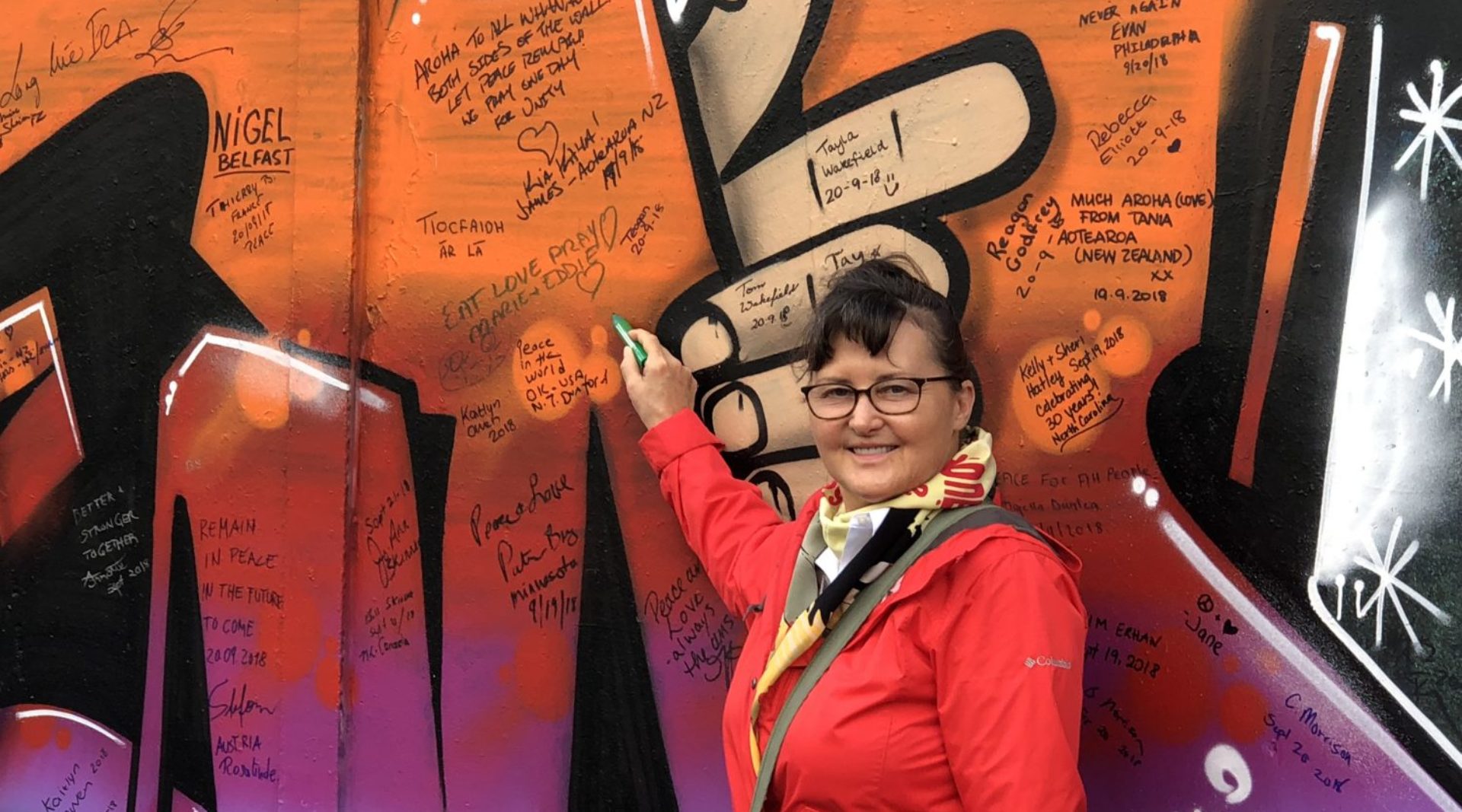 My husband Eddie and I joined his cousin, singer/songwriter and seasoned Ireland travel group leader Carroll Brown for our first visit to Ireland.

I got the chance to add my own graffiti to one of the “Peace Lines”. Not original, but “Eat Pray Love” holds unexpected meaning and value as I reflect on our visit to beautiful, bustling Belfast.

Even without a guide, it would have been clear that the walls, known as “Peace Lines”, in the neighborhoods of West Belfast were built for a definitive purpose…to isolate and protect. The walls are intimidating, made of concrete, brick, and/or steel. They are almost 20 feet tall and topped with steel fences with barbed spikes at the top. The majority are in Belfast, but they are also located in other urban areas of Northern Ireland, more than 100 total. The gates of the walls are still closed, mostly at night, by the Department of Justice or the Police Service of Northern Ireland. They were built as a temporary measure to prevent violence and protect people from each other, in different neighborhoods, during the years from 1968 to 1998. This period in Northern Ireland’s history is known as “The Troubles”.  The walls provide a canvas for graffiti and murals that tell of political strife and violence and they pay tribute to people who lost their lives during that time.

They’ve become the most captivating and well-known murals in Europe.

Our bus driver, Owen, drove us through the neighborhoods to view the murals as our guide shared personal stories of growing up there during the period of violence. She recalled her teens, when her parents often warned her about the dangers of going outside the protection of the walls surrounding her neighborhood. Of course, she said, as a precocious teen, she went out anyway. Her tone at times invoked a sense lingering regret for senseless loss and an underlying hint of bitterness. But her witty humor also belied an earnest desire for continued peace and prosperity.

The government’s ambitious plan to see the removal of the walls by 2023 requires agreement by the neighborhoods on both sides. A few are already removed, signs of positive change. Some of the neighborhoods’ people are reluctant to believe in the plan’s success. Opinions cut across generations, young people who were not there during the violent years are more willing to allow the walls to be removed than older people who have lingering memories of the conflict.

Our guide’s pensive recollections were balanced by her inspiring optimism for the future of Belfast. As I listened, I began to notice the large number of cranes punctuating the skyline. They offer a contrast to the confining walls on the ground. The cranes point to peace and prosperity.

The complex history of The Troubles in Northern Ireland began almost 100 years ago after the Irish War of Independence.

Six counties in the Ulster region of Ireland became part of the United Kingdom (UK) and the rest of Ireland became the Republic of Ireland (Irish Free State). From that time, unrest ensued in Northern Ireland between minority Republican Nationalists (mostly Catholics) who wanted independence from the UK and majority Loyalist Unionists (mostly Protestants) who wanted to stay in the UK. Violence erupted in this polarized setting when the minority began to campaign against discrimination and State officials acted to block it. The thirty-year period is described as a “low-intensity conflict” or “guerrilla war”. The armed insurgency (paramilitary) was comprised primarily of elements of the minority, known as the Provisional Irish Republican Army (IRA). State Security Forces and eventually the British Armed Forces rallied to contain the violence. After thirty years of struggle, 3,532 people had died and an estimated 50,000 injured. The IRA declared a ceasefire in 1994 and U.S. President Bill Clinton appointed special envoy, George Mitchell to chair the international commission of disarmament, known as The “Good Friday Agreement”.  “The Troubles”.

The city is fueled by the overall prosperity of the county in the areas of services, administration, and finance. Historic architecture, monuments, pubs, shops and restaurants provide a vibrant atmosphere for locals and tourists.

Visitors have the opportunity to put the Peace Line murals in historical perspective at the Belfast City Hall visitor exhibition.

The permanent visitor exhibition at Belfast City Hall is comprised of sixteen separate rooms that provide a comprehensive “journey from the city’s past to present”. Beautiful stained-glass windows depict subjects such as the Irish myths; hunger memorial; and history of women. The structure itself is stunning, a magnificent example of Edwardian Baroque Revival architecture, completed in 1906. During that time, Belfast prospered from industries such as shipbuilding, rope manufacturing, and textiles. The Monuments and memorials on the grounds include The Titanic Memorial, the Korean War Memorial and others.

Visitors are welcomed to peruse the exhibition and the grounds, take in the beauty, and learn about the rich history of Ireland on their own, or with a tour with a guide. There is no entrance fee. We enjoyed a very good lunch for little cost at the Bobbin Coffee Shop located inside. See Belfast City Hall visitor exhibition for more information.

Carroll Brown has been performing at Irish and Celtic venues and playing a mixture of folk and country music throughout the American southeast since 1974. Each year, he leads a tour of Ireland, Scotland and/or Whales. We joined Carroll this year for a fascinating itinerary in Ireland.

Some of many highlights

Carroll requests Owen Mohen as the bus driver for every trip. Owen drove along the narrow, winding roads of the countryside and busy city streets with ease. He drove from the Republic of Ireland and into Northern Ireland seamlessly, as if it were one country. All along the way, he provided his musings of all sorts of things about the areas we visited. The countryside is incredibly beautiful everywhere, but especially along the seashore at Malin Head, County Donegal, the very northern tip of the Republic of Ireland, one end of the Wild Atlantic Way.

We visited castles that are now museums and stayed overnight along the stunning Antrim Coast at one castle that is now a hotel, Ballygally Castle, complete with haunted tower and enchanting grounds.

We enjoyed live traditional musicians in iconic pubs such as Peadar O’Donnell’s in Londonderry, UK, and live music along the way, courtesy Carroll Brown and fellow travelers Fayssoux McLean and Daniel Craft.

These experiences and so many more inspire future stories in the series of Our Visit to Ireland – 2018 travelnotesandstorytelling.com