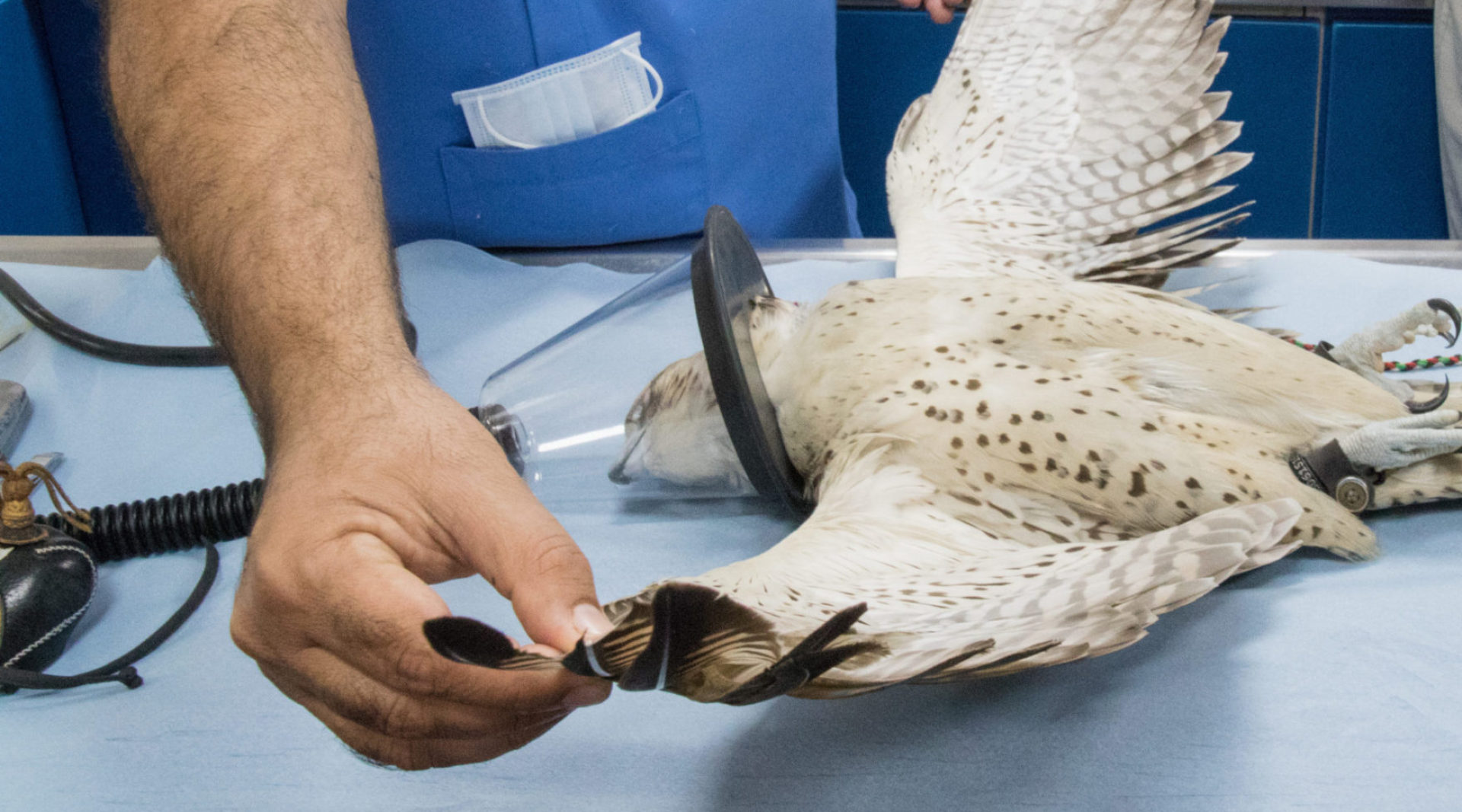 A One-of-a-Kind Hospital for Prized Pets

Long before Drones and GoPro cameras gave us aerial views of the globe, birds of prey combed miles of desert in search of food for the nomadic Bedouin people. Once a sport exclusively for kings and aristocracy, falconry literally meant life or death for Bedouins of the Middle Eastern deserts. As hunters, this meant whether the tribe ate that night or not. Today, falcons, “retired” from hunting, are prized and revered pets in the United Arab Emirates UAE.

The Abu Dhabi Falcon Hospital-first of its kind in the world-was established in 1999 to treat, study and rehabilitate these beautiful birds. At this unique hospital, the falcons-some costing as much as a luxury car-are cared for by a team of veterinary staff from all corners of the globe.

Ironically, all the falconers are men, even the receptionists, but the hospital is headed by a female veterinarian.

And a Westerner at that, with Dr. Margit Gabriele Muller as executive director. What started out as a small endeavor, with trust and respect not easily won or given in this tribal and patriarchal society, became the cradle of modern falcon medicine in the 21 st century. So critical is the Falcon Hospital; two previously unknown diseases have been discovered there. Under Dr. Muller’s tenure, the lifespan of falcons increased from 12-15 years to 18-20 years, all by encouraging the falconers that regular check-ups are essential to their pets. Even Emirati royal family rely on Dr. Muller’s expertise for their own falcons.

From wings, talons and beak trims (while under anesthesia), to full-service boarding during the May-September molting season, these birds get VIP treatment. The hospital provides a separate exercise building for flying laps, complete with air conditioning, a “spa,” small pools, and an area for soaking up some rays with feathered friends. Here, they have the good life! The Falcon World Tour allows visitors to learn about Bedouin desert history while these birds of prey perch on your gloved hand for belly rubs.

Where else can you get this up close and personal with a falcon? What secrets of the desert they must know?

The hospital recently opened its latest venture: The Five Star Avian Hotel ADFH, for short and long-term stays for falcons, and now parrots. Each spacious room is designed for free movement and flight possibilities. Completely equipped with toys, climbing trees, as well as a music system for avian enjoyment
during the day.

In the U.A.E., late April already sees temperatures approaching triple digits, enough to “ground” the falcons for the summer. With the molting season just days away, feathers start shedding and flying becomes lethal. Even the loss of one flight feather can destroy their balance, making a crash on impact inevitable. With speeds in excess of 150 miles per hour, it’s not a pretty sight when a falcon crashes or flies into a car. Add that to “white-out” conditions-the sneaky desert sandstorms that rage without warning-and flying becomes treacherous, both aviary and mechanical.

When not “taking a treatment” at the hospital, these

birds are also full-fledged globetrotters. So revered by Emirati, each falcon is issued their own passport for international travel. The passport shows the bird’s picture, pedigree, and vital statistics, along with a picture and name of its owner. Between the periods 2002-2013, 28,000 falcon passports were issued, which combats smuggling of the birds. With their green U.A.E. government-issued passports, the falcons fly with their owners, usually in business or first class. They rarely touch a coach seat and never a cargo hold for these beloved pets! We should all be so lucky to fly first class on Airlines Emirates or Etihad.

What sets falcons apart from other predatory animals is the fact that they can be trained to deliver their prey without killing it first. Way before they “officially” held passports, they were travelers. Imagine what they must have seen soaring high above the desert for centuries! So entwined with Middle Eastern culture and history, UNESCO included the sport of falconry in its Representative List of the Intangible Cultural Heritage of Humanity. In the U.A.E., the image of the falcon is everywhere, even on bank notes.

The Falcon Hospital is an experience that visitors to Abu Dhabi will not want to miss. Book at Falcon World Tour or Abu Dhabi Falcon Hospital to discover this fascinating, one-of-a-kind hospital to learn about Emirati and Bedouin culture and these beloved birds of prey. Book well in advance as tours sell out quickly!

A self-professed travel junkie, Audra has been traveling her entire adult life. As a teenager, she landed a dream job with an international airline out of JFK. From there, she hit the skies while simultaneously attending university for her B.A. After discovering Great Escape Publishing-and its precursor I.T.W.P.A.-a passion for photography & writing was born. Never dreaming that monetizing her passion project was even possible, she started exploring multiple avenues: travel writing, photography, blogging, lecturing and videography.

Audra took the creative images in this story during her visit to the Abu Dhabi Falcon Hospital.

I met Audra half way around the world during a Great Escape Publishing photography expedition to Jordan under the expertise of award winning freelance documentary filmmaker, Joe Sindorf. Audra and I recently reunited state-side in scenic Greenville, S.C. for a fun-filled, photography and food exploration. More on that in a later blog! Even though we sometimes stumble over our “Yankee” vs “Southern” accents, we cemented a fast friendship over our love of travel, travel writing and photography. Find more of Audra’s fascinating travel stories at Cashmerejet.

To learn more about the fate of endangered falcons in the UAE., visit Sheikh Zayed Falcon Release Program, named for the first president of the United Arab Emirates.

Recent News: The high demand for falcons on the black market, reported by DailyMail.

An entertaining read: The Falcon Thief: A True Tale of Adventure, Treachery, and the Hunt for the Perfect Bird Hardcover – February 11, 2020 by Joshua Hammer (Author)

Learning Photography with the Professionals – Expedition to Jordan

My heartbeat quickened and I held my breath as we[...]