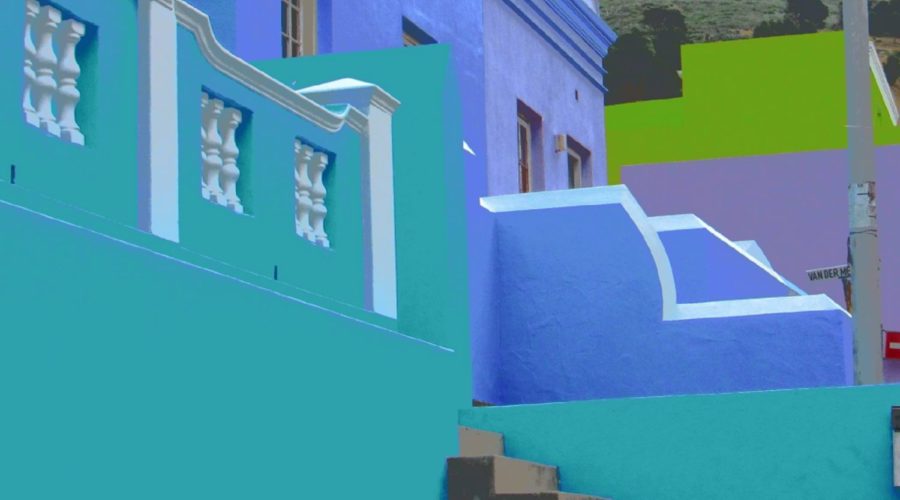 We gazed up the steep cobblestone street to the magnificent terraced houses that lined each side. Painted in radiant colors such as cerulean blue, magenta, lemon yellow, lime green, aqua, peach, and lavender, they were a stunning sight that invoked a sense of joy and happiness. We were thirty-three women with Leadership Women – International, visiting the Bo-Kaap (Afrikaans for Above the Cape) area of Cape Town,

South Africa. Our guide handed out colorful bandanas. We needed these to cover our heads before entering Auwal Mosque, first and oldest mosque in South Africa. Why different color bandanas? Just for fun? No! The bandanas served dual purposes. After visiting the historic Mosque, we would separate and enter a home corresponding to the color of our bandana, where we would prepare traditional Cape Malay foods for dinner!

From the blue terrace of her home, Gamidah Jacobs greeted the group with blue bandanas. We would spend the next two hours in her home where she inspires visitors with traditional cooking techniques. She explained some of the history of the Bo-Kaap area as she led us down the hallway to her kitchen.  The picturesque houses passed from one generation to the next for many years and eventually together, became an historical monument. “And the steep hills?” Gamidah said with a laugh, ” I have walked these hills since I was a child!”

Gamidah’s warm and benevolent humor made cooking seem effortless as she took us through the stages of rolling the dough for the round flat roti bread; folding thin triangles of pastry for samosas, making the dough for chili bites (recipe below), and preparing other delicacies. The bright colors and savory flavors of Malay foods are enhanced by spices such as cardamom, cumin, turmeric, fennel,

rosemary. Gamidah explained that turmeric especially enhances the color of foods and it’s important to get the right combination of spices for the unique piquant flavor of each dish. The recipes for these dishes can be somewhat complicated for a novice but with Gamidah’s guidance, it seemed like no time before we were sitting down at the table to enjoy a tangy and delicious meal.

After dinner we went outside to the terrace as dusk gave way to darkness. Gamidah bid us farewell as she left for the Call to Prayer (Athaan). The Athaan, coming from the minaret above filled the air with a touching sound as she left. It was a fitting departure after such a lovely experience.

Soon we heard the sound of lively jazz music coming from up the street at the top of the hill. We could see musicians in colorful sequined suits parading down the street. They were dancing and playing lively jazz music with a range of instruments including trumpets, trombones, banjos, guitars, and various percussions. The musicians were part of the Kaapse Klopse, (minstrel troupes) who celebrate Tweede Nuwe Jaar (Second New Year), an annual celebration that begins on the eve of the New Year, 1 January. As the minstrel troupe passed each house, members of our group left the terraces and joined them for a thrilling “taste” of celebration! Imagine the fervor on 1 January when 13,000 minstrels take to the streets of Cape Town!

Spices are an essential ingredient in Malay recipes and their origin is interwoven with the story of the people who for centuries achieved the savory benefits of their flavors. The Dutch East India Company flourished for two hundred years (1602 – 1800), along the routes in Europe and Asia that traded spices, silk, porcelain, metals, livestock, tea, grain, rice, soybeans, and sugarcane. The successful trade of these goods went hand and hand with colonialism and slavery. The [Dutch East India] Company colonialized the area of Cape Town, which was mid-point of the maritime trade route from East to West. They brought slaves, political exiles, and prisoners from India, Indonesia, Malaysia and other parts of Africa. In 1763, a Dutch owner built huurhuisjes (rental houses) for his slaves, the Malay, in the area of present-day Bo-Kaap. Other liberated people came to the area after emancipation in 1834, and there were many with skills in various crafts and trades. The people of India brought the Muslim faith and eventually built the mosques. The descendants of this historical multicultural infusion of people became known as “Cape Malays” (Cape Muslims). The Malay Quarter, associated with colonialism, was officially renamed Bo-Kaap in 2016, a name more associated with the people of the Islam faith.

The Muslim faith is the most important feature of the Bo-Kaap community and the Auwal Mosque is a key historic landmark. Many of the prisoners that the Dutch East India Company brought to Cape Town were important people who resisted colonialism. One example is Tuan Guru (Imam Kadi Abdus Salaam), from the Island of Tidore, who arrived in 1780 and was incarcerated on Robben Island, the same island where Nelson Mandela would later be imprisoned for 18 of the 27 years that he was incarcerated. Tuan Guru traces his lineage to the Sultan of Morocco and the holy prophet Muhammed. He was said to the qadi (magistrate or judge) and a prince. Tuan Guru was a hafiz al-Qur’an (guardian or memorizer, usually someone who has memorized the entire Qur’an). While imprisoned, he wrote several copies of the holy Qur’an from memory. Upon his release he married a free woman and went about his main concern of agitating the authorities for a madrasah (religious school) and eventually conducted the school in a warehouse where many of the people of the area converted to Islam. Later in 1795, the British granted permission for a masjid (Arabic for mosque) and Saartjie van de Kaap, owner of the warehouse, donated it to Tuan Guru who converted it to the Auwal Mosque.

The Call to Prayer is announced by a man, the muezzin, from the minaret or tower of the Mosque. The picture of the minaret of the Auwal Mosque is provided courtesy Around the World in 80 Clicks. The video is courtesy Erhan Esen, “Auwal Mosque Prayer Call, Dorp Street, Bo-Kaap, Cape Town, YouTube”

The heritage of jazz in Cape Town, known as Cape Jazz, began in the mid-20th Century with marabi ( piano jazz). The lively culture of the Cape Towners took the heritage “to the streets” where they prefer to celebrate with instruments they carry, such as brass, percussion, banjo, and guitar. The minstrel troupe survives as one of the longest running cultural traditions in South Africa. For the complete history visit South African History Online (SAHO).

The Bo-Kaap area of Cape Town is a scenic area, sandwiched on the slopes of Signal Hill, between Cape Town and Table Mountain. It is listed as “one of the most magical and picturesque cities in the world”, and “a fairy tale and living museum”. The vivid colors of the homes obscure their oppressive origin, a time when their color was restricted to white and their inhabitants were slaves. The colors signal individual freedom and expression and point to the cooperative spirit of the people who selected the most visually striking but compatible color combinations.

Today the unique cultural identity of the Bo-Kaap area is at risk. Because of its beauty, affluent people from other parts of Africa and Europe are moving in, sometimes for just a summer residence, as they persuade long-time residents to sell. See more of this trend and the consequences in The New York Times as reported by the CapeTown Journal, “Muslim Enclave Forged in Apartheid Now Faces Gentrification”.

Leadership Women is a nonprofit organization headquartered in Dallas, Texas. As noted on its website, it is “the longest running women’s organization in the United States and exists to provide programs that advance and improve the personal, economic, and professional status of women.” Find out more about Leadership Women at https://leadership-women.org.

Mix dry ingredients in a bowl. Add onions and spinach and mix together well. Add 200 ml to 250 ml water and form a dough and add the onions and spinach mixture. Mix the dough until the texture is easy to drop. Fill a pot halfway with oil and heat so it’s medium-hot but not boiling. Dip a spoon in oil and scoop up enough dough to make one golf-ball size dhaltjie. Drop the dhaltjie into the oil and fry until cooked in the center (use a skewer stick check the center of the dhaltjie for doneness). Drain dhaltjies on paper towel.